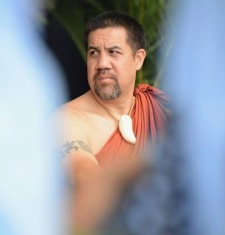 Traditional Hawaiian proverbial sayings are not simply quotes of inspiration; they embody the beauty and kaona of the Hawaiian language and culture for Keola Kawai’ula’iliahi Chan, Ka Pounui (Executive Director) of ʻAha Kāne Foundation for the Advancement of NativeHawaiian Males. To account for the personal life of his accomplishments is to find the meaning and the mana in the language of our lineage as it ties to everyday living.

Keola Kawai’ula’iliahi Chan was born in the season of Kū under a Kūpau moon on September 11, 1975 in Honolulu of Kō Pae ‘Aina Hawai’i. Keola is a man who finds more substance from the oral traditions of our ancient ancestors, marked by his career as a professional Hawaiian musician and entertainer. He began increasing his natural talentin 1993 through the teachings of Ainsley Keli’i Halemanu, George Holokai, Kimo Alama Keaulana, Kahauanu Lake, and Ka’upena Wong among other honored and respected musical talents. Once prepared, he was invited countless times to shares his gifts of ‘ukulele, guitar, upright bass, hula, and oli with other native peoples throughout the world to include Aotearoa, Australia, Canada, China, Italy, Japan, Mexico, Tahiti, Taiwan, and across the coasts of the Continental United States.

His ability to make quick and conscientious decisions has served him well entertaining throughout the world and sharing the traditional styling’s and vocal melodies of Hawai’i’s previous generation of musicians. Now as his considered pastime, Hawaiian music and its unique rhythms have built a strong cultural foundation of learning and enjoyment in Native Hawaiian culture, practices, and beliefs for the extent of his professional and personal life. His talent has helped him educate children and adult students in the art of music compilation, translation, arrangement, and instrumentation. His ability to transfer between such meticulous elements to create harmonious music is evident in his daily work and the characteristics he portrays. He has enjoyed his musical passion for nearly twenty years and has accomplished much success and realization with Hawai’i’s premier musicians from the past and present in thousands of performances.

In 1997, as Keola focused less on professional music, he found a new source of inspiration and strength from the medical healing arts of traditional Hawai’i. Just as his musical talents were fostered and developed by master musicians, so too would be his training route as a healer. Studying for years under Alva Andrews, Roxanne Bertelmann, Mālia Craver, George Holokai, Alapa’i Kahu’ena, Ken Kamakea and other experts, Keola has built his knowledge in lomilomi, ho’oponopono, lā’au lapa’au, lā’au kāhea, hula, oli, and ‘ai kūpele. As a learning practitioner for many years he became a standout pupil of several of his kumu who allowed him to share his gift and began teaching on his own in 2001.

As Keola became recognized within the community as a master kanaka lomilomi and skilled teacher, he envisioned and founded Hui Mauli Ola in 2002 as an avenue to address the health and wellness of the Native Hawaiian people. His approach was unique and unforeseen; truly ground-breaking in addressing the self-determination of a marginalized people through the means of traditional healing. His organization has grown in every aspect and is regarded as a premier multi-disciplinary healing association in Hawai’i. Their skills and expert trainings are highly sought after by Hawai’i’s most influential corporations, largest attended community events, countless non-profit occasions, and grows to educate the students, parents, and educational communities at many of Hawai’i’s public, charter, and private schools. Their future success to grow and expand is related to the courageous and solid foundation with which it has been envisioned.

In 2007, Keola found himself as one of the central specialists at Life Foundation where he helped to develop and publish projects, curriculum, programs, workshops, and research relevant to addressing HIV/AIDS within the Native Hawaiian community. His recognized accomplishments lead him to be a recruited candidate to help build the Research Division of the Office of Hawaiian Affairs in 2010. It is there that Keola applied his passion for Native Hawaiian cultural issues to promote indigenous progress through the lens of the past in its relevance to today. The fields of health and education are sure to benefit further from his innovative and progressive research. Such contributions are assured to be a future asset to the Native Hawaiian community. His expertise is apparent in the many local, national, and international conferences Keola is requested to speak and present at. His sharing’s are always inspiring as they touch on the naÿau and soul that embody how we as native peoples live in a post- modern world while remaining firmly planted in accordance to the spiritual realm of our genesis. Such balance captures academic researchers and community participants alike in the creation and sharing of his work. In 2013, Keola procured the position of Ka Pounui of ʻAha Kāne Foundation for the Advancement of Native Hawaiian Males. Under his leadership ʻAha Kāne is committed to reestablishing the traditional constructs of the Hale Mua (Men’s House) within our communities to support the development and education of Hawaiian men.

Hawaiian culture is prideful in the relationship between a parent and their child. In addition to the fulfillment Keola receives from our ancestors, the land, music, and healing, he is most grateful and fulfilled in the accomplishments of his four young children. His pride is observed in his ability to remain a positive and strong male role model for their development. Keola intergenerationally transfers his noteworthy teachings from some of Hawai’i’s most revered and honored kūpuna so that they may grow from those lessons and acquire his mana inherently and through hard work. Within his four children lie a young healer, a future musician, a burgeoning researcher, a passionate community leader,and limitless bounds of vitality as the generation of the future seeks to empower the Native Hawaiian people through the rebuilding of our healing practices for the successive sustainability of our wellness.